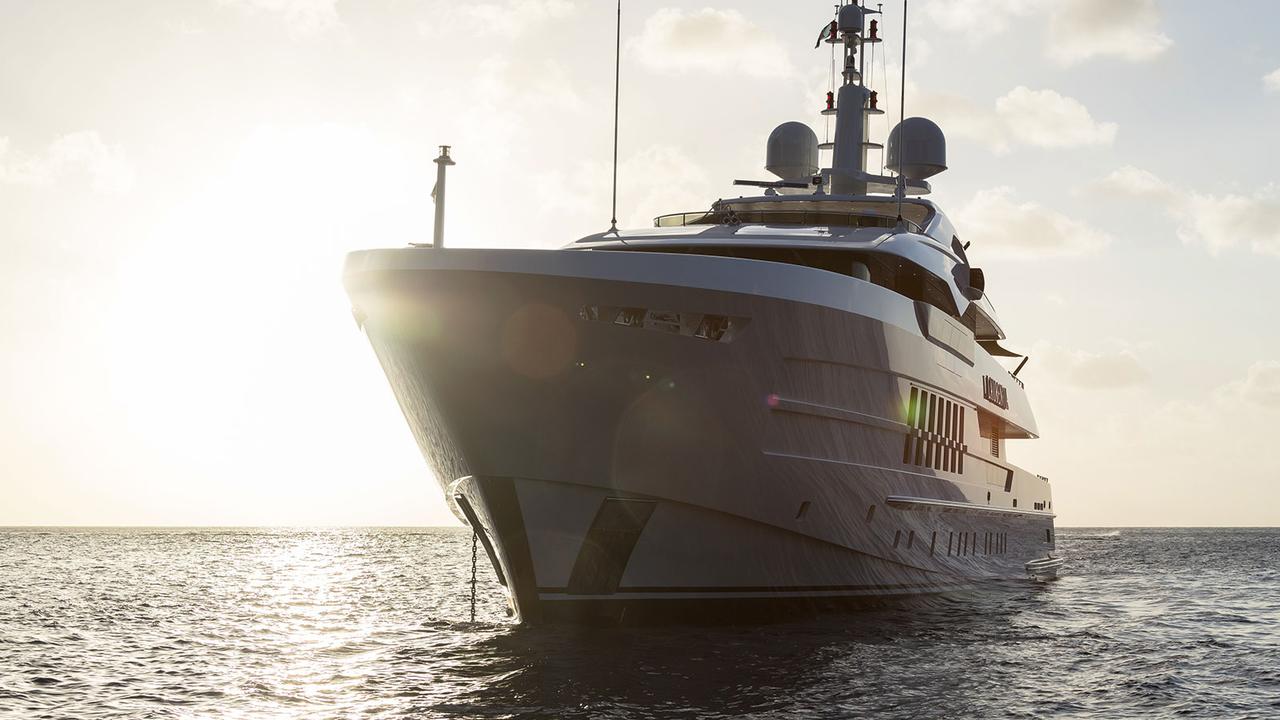 A busy prospective owner, a nearly finished Heesen and hundreds of WhatsApp messages. Cécile Gauert tells the very modern story of the making of Laurentia…

Although it’s not unheard of, it is still rare for a client to buy a superyacht sight unseen. Laurentia, a 55 metre Heesen started on spec and resold in the late stages of construction, is a great example of how this can happen, and with happy results.

“In all my years as a broker this is the first time when everything was done via WhatsApp messaging,” says Barin Cardenas, founder and president of The New Yachts Company. “The buyer never once visited the yard or visited the boat in person.”

The future owner, a fiercely private person, was not uninterested in the outcome; quite the opposite. He had a lot of knowledge and contributed many of his ideas, Cardenas says. He had narrowed down the search to a new, finished (or nearly so) yacht built at a northern European yard.

As the new yacht market recovered after years of sluggish growth, it was not an easy task. Cardenas and the principal of Miami-based design firm Radyca, who acted as owner’s rep, searched for good options for about 30 months until an “Aha” moment at the Fort Lauderdale International Boat Show in 2016. Heesen’s 70 metre Galactica Super Nova caught the client’s attention. Unfortunately, she was not for sale and there were no projects of that size available within a short delivery window at Heesen.

The owner’s team began discussing other options with Heesen’s commercial team. The yard’s new 55 metre series offered some of the features the client wanted – room for toys, six cabins and long-range capability among them. So when Project Alida (hull No 2 of Heesen’s 55 metre series) became available, somewhat unexpectedly, the owner’s team went to the shipyard in Oss, the Netherlands, to investigate. “Within an hour our client was reviewing a properly edited film on a private link,” Cardenas says.

The yacht was still in dry dock but nearly finished. All that was needed from the builder’s point of view was to open the water valves and float the yacht out. But it was not to be – at least not right away. “He liked the layout and the bones of the boat. What he did not particularly like was the interior,” Cardenas says. “Boats are supposed to be fun, a place to escape the corporate environment.”

When the client conveyed that he did not like the décor, the team went to work layering different fabrics and finishes, and sketched over photographs they’d just shot to show how Project Alida could become Laurentia, all the while communicating via WhatsApp as the client ran in and out of meetings.

Radyca is a new name in the yachting world, but its team has already designed yacht and aircraft interiors, in addition to several high-end residential and commercial projects. Its office, in one of Miami’s glittering high rises, has been at the heart of the transformation of the financial centre into a vibrant liveable part of the city. The firm’s portfolio includes a vast luxury entertainment centre, which opened recently near Brickell Avenue.

The interior of Laurentia, as it exists now, is the confluence of its lead designer’s and the client’s visions. “The common denominator is that we try to create sophisticated, simple designs, but always warm, cosy and relaxing, which is the purpose of a boat, at least for the clientele that we have,” says the lead designer on the team. “We have never worked with a client who expected a more formal use of the boat.”

An interior rethink is a common experience when stepping into a build at such a late stage. The yacht’s interior had been done for someone else. “It was nice but busy, but it had extremely good bones. We told our client, ‘We think we can make it work’ and he said, ‘OK, make a list of everything you would change without hesitation’. To our huge list he added his own changes. Then he said, ‘Go back to Heesen. If they can deliver that in time for me to use this summer, we have a deal.’ And ‘that’ included relocating the [spa pool], adding awnings, changing a bulkhead on the sky lounge. It was huge surgery.”

The white oak with wenge accents on the surrounding bulkheads remained, as did taps, mirrors and vanity units. But “we changed all the flooring, ceiling panels, fabrics, all the leathers, all the wallpapers, any feature wall and all loose furniture.” The large and beautiful master suite, the largest of six cabins on board, was stripped of its finishes almost entirely. “What was dark we made light, what was light we made dark,” the designer says with a laugh. “We were just stubborn.”

One of the biggest jobs, which involved metal work, was the reconfiguration of the sundeck and the spa pool, which was rotated to create a huge, private sunbed area and carve out space “for a champagne or tapas bar”. More changes happened on the main deck aft, where the seating area was expanded and reconfigured to accommodate an outdoor cinema, and the lower deck, where the large beach club had gym equipment added. One of the most complex tasks, surprisingly, was fitting a copper light fixture to the curved walls of the redesigned staircase. “This whole thing [the staircase] was the most challenging for Heesen. That and the bulkhead in the sky lounge [which was redone to take out a secondary crew passage and install a 2.2 metre mirror television in the reconfigured upper saloon],” the designer says.

“The structure of the stairs was there, but they had to take the whole thing out and rebuild every single step, do the millwork and the wall panels again; it was like a puzzle. We added stainless steel overhead, added the lighting underneath. They had to do electricity, wood, metal, leather, bringing all the trades in this tiny spot.” And it all had to be done in a compressed time period. After the first meeting – “a long day in Oss,” as Cardenas describes it – there followed two months of negotiating and drawing and four months of work. “It was extremely quick,” Radyca’s lead designer says.

To the credit of the builders, by August Laurentia was on her way. “It demonstrates the flexibility of the yard to be able to react in a quick manner and give the owner what he’s looking for,” says Thom Conboy, Heesen’s director of sales for North America. “It’s not ideal for the yard; the ideal situation is to have the boat sold a year or more before delivery so the client still gets all personalisation.” But the silver lining is that Heesen got two 55 metre yachts sold within a few weeks – Project Alida’s former owner decided to buy a later hull to have more breathing room in the construction schedule. “It was luck and great timing,” Conboy says.

What made this possible is that Heesen does nearly all of its own yacht interiors from two large furniture shops, including one off site near the German border, enabling the yard to keep control over its usually aggressive production schedule. Her unconventional story, and an interior by a design firm with a track record as impressive as its public profile is low, made Laurentia intriguing but she proved elusive. It was the end of the Caribbean season by the time I caught up with Laurentia and her crew of 13 in St Lucia’s Marigot Bay. The yacht was easy to spot against the backdrop of the emerald bay and a colourful local flotilla of fishing and excursion craft.

While resort dwellers craned their necks for a better look of the very private beauty from the nearby Capella resort, the crew was in full prep mode for the imminent trek north-west to Bermuda, then across to the Azores, Gibraltar and eventually to southern France. The captain had already brought Laurentia across the Atlantic and was looking forward to his “20th or so” transatlantic journey.

“She is designed for long-distance cruising,” he says. “She is very comfortable, very stable.” The naval architecture is by Van Oossanen, which made use of its patented Fast Displacement Hull Form. The 55 metre series is the first application of this hull to a full displacement yacht. “A traditional full displacement hull, while efficient at cruising speed, becomes very inefficient at hull speed,” Perry van Oossanen says. “When we tried the fast displacement hull, we discovered we could extend the top speed a bit without stretching the engines too much.”

This hull form resulted from an extensive parametric study that used computational fluid dynamics (CFD), this time “aimed more at efficient cruising than a high maximum speed”. Besides efficiency and low resistance, the studies also focused on comfort, especially roll at anchor. The yacht has large fins by Naiad, installed forward of centre, but Van Oossanen prefers not to reveal the details of what makes the hull so efficient. “There are some secrets of the trade in the fine tuning of the round bilge displacement hull, the bow, how you distribute the volume; it’s subtle differences with big advantages,” he says.

Aside from fuel efficiency, there are other advantages to a slippery hull powered by smaller engines. “Decreasing the engine power comes with so many benefits – more space, less noise,” Van Oossanen points out.

But smaller engines don’t equate to less of a boat. “It’s a beast of a boat,” is how Conboy puts it. “It’s an incredible sea boat, strong and efficient.” She probably won’t go that fast often but during sea trials in the North Sea last summer, Laurentia hit a top speed of 16.6 knots, which is especially impressive considering her heft. “She is 740GT, the largest 55 metre platform built at any recognisable shipyard,” Conboy adds.

This is the second of Heesen’s full displacement 55 series. “The first one we built [and delivered in July 2015] was a boat called Azamanta and she had an enclosed tender garage,” Conboy says. In contrast to Azamanta’s golden brown hull, Laurentia is all white. Her vertical portholes, designed by Heesen’s long-time design partner Omega Architects, look like the black keys of a piano from the outside; another distinct feature is a “shark tooth” in the superstructure overhang.

Some exterior features were streamlined from the first 55 metre for more efficient construction. “It’s a typical Omega design,” says Frank Laupman, the firm’s CEO, “because basically she is very simple. There is not a lot of engineering the yard needs to do – no wing door, no hatches – so she can be efficiently built. My background is from industry and, while I really like to create to owners’ ideas, I am passionate when it comes to shipbuilder requirements. I thrive for efficiency and rational design.”

The biggest difference from hull No 1 is the layout. There’s an open tender bay on the foredeck instead of an enclosed tender garage on the lower deck, which allowed for a large beach club. “Like any of our platform boats, the design continues to evolve,” Conboy says. The mast, which lowers from view when the boat is at anchor, doubles as a crane to lift off two 6.2 metre Castoldi tenders. And then there is deep storage for jet skis and other toys. Laurentia, which will be selectively available for charter, has plenty.

The tweaking was a success from all angles. The owner, who finally got to see the yacht about six weeks after the contract’s signature, is reportedly very happy and the yacht’s relaxed and elegant interior was up for a World Superyacht Award this year. But it is nearly as satisfying to witness how the confluence of technology and of a streamlined yacht-building process can change the way business is done. “Technology, if used correctly, might just save this old-school industry,” Cardenas says.

Inside Vripack and The New Yachts Company’s concept Maharani

Inside Vripack and The New Yachts Company’s concept Maharani