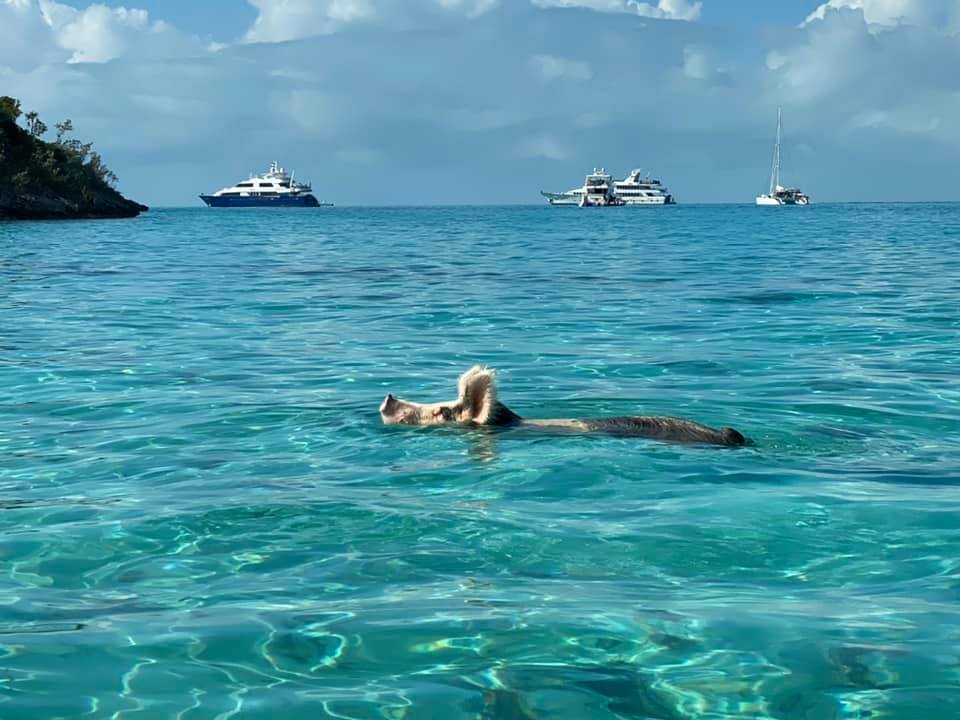 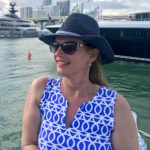 As I promised in my previous blog about getting to the Bahamas and checking in [click here], I will share some of my favorite destinations.

If you are looking for (mostly) unspoiled nature and turquoise waters, I guess The Exumas[1] are generally considered somewhat of a “Holy Grail” (though you will see in my next couple of blogs that there are other great destinations). The colors are so mesmerizing, and ever changing (with the light, depth, and bottom type), it is difficult to take your eyes of the land- and waterscape. I always feel like I am “getting drunk” on the amazing views, you just cannot stop but look around and be amazed, and you cannot get enough of it, the colors are so intense and so beautiful. On top of that, sunrises and sunsets are incredibly beautiful, and diverse. During the winter especially, there are often squalls and systems blowing through, making for some dramatic skies, with the greys in the sky providing beautiful contrasts to the turquoise waters.

The Exumas are an archipelago of 365 cays and islands, starting some 35 miles southeast of Nassau. I am going to focus on the northern part of the Exumas, going as far south as Black Point, as this provides for a nice cruising itinerary, within reasonable distance from Nassau[2] (for those of us who must return to reality, at some point), and covers some of the main highlights that are likely to be on your bucket list (such as turquoise waters, sand bars, Bahamian iguanas, nurse sharks, turtles and rays, and of course the Swimming Pigs). There are plenty of other beautiful anchorages, cays and sandbars to explore in addition to the ones I will mention in this blog. Just take your boat out there and go explore!

Provisioning options are somewhat limited in the northern Exumas though, so it is smart to stock up in Nassau before heading down into Exumas. If you need extra supplies, you can usually find some at the Ships Store at Highbourne Cay, the Pink and the Blue Stores at Staniel Cay, and several small grocery stores in Black Point. The sooner you come into any of these stores after the mail boat deliveries, the better the selection.

The first and most northern stop is Allen Cay (36 miles from Nassau).[3] There is a nice anchorage there, and an opportunity to meet the famous Bahamian Iguanas. They are quite friendly and usually don’t say no to some grapes or veggies. Some of them do hiss at you though, so I usually keep my distance!

Just south from Allen Cay (5 miles) is Highbourne Cay,[4] a privately-owned island but with a nice marina and several luxury cottages for rent. The anchorage by the very large beach is very nice, but you may also enjoy going into the marina (and maybe top up on fuel and water). There are several nice beaches, a large swing in the water on a protected shallow lagoon, a small Ships Store, and a nice restaurant with a great view called Xuma. Going for a nice walk or bike ride around the island is also fun. There are often a bunch of nurse shark at the entrance to the marina where the fish cleaning station is, but these are definitely not for petting as bull sharks or tiger sharks are often mixed in with the relatively inoffensive nurse sharks.

Our next stop going south is usually Norman’s Cay (13 miles from Highbourne), with a protected anchorage, some nice beaches, an almost fully submerged plane wreck, believed to have been a smuggler’s plane that crashed in the 1980’s,[5] that is fun to snorkel, and some small cays you can have all to yourself. There is also a nice restaurant.[6]

[5] Norman’s Cay infamously was a drug smuggling hub for several years in the 1980s: https://www.pbs.org/wgbh/pages/frontline/shows/drugs/business/cay.html

The next stop going south is Shroud Cay (7 miles from Norman’s). Shroud Cay is definitely one of my favorites. It is part of the Exuma Cays Land and Sea Park[7] and is just so beautiful, untouched, with pretty white beaches, and creeks and shallow estuaries great for exploring by kayak or on a paddle board. Dinghies are allowed (at slow speed only!) on Sanctuary Creek, making for an incomparable ride through shallow waters with a 1,000 shades of turquoise, and mangroves (best avoid this ride at low tide!). There is a beautiful cut through to the ocean about half way with spectacular views, and a sand bar that allows you to “walk on water” across the cut.[8] There are no facilities or amenities on the island.

[7] Check the park’s web site for the fee structure for anchoring inside the park (and for the mooring ball fees where applicable): https://www.bahamas.com/vendor/exuma-cays-land-sea-par

Continuing 23 miles south from Shroud Cay you will reach Warderick Wells, home to the headquarters office of the Exumas Land and Sea Park, and it is always nice to stop by to pay your mooring fees and chat with whoever is on duty, and sometimes even the park warden. There are two mooring fields, the northern field in the shape of a horse shoe around a sand bar, and the southern mooring field by Emerald Rock, which is also a nice anchorage. You will have to radio the Park Office to find out which mooring ball you can pick up.

There are several hiking trails on the island, including one up Boo Boo Hill (where many people leave a piece of driftwood with the name of their boat on it) and the Blow Holes. There are magnificent views from the hill tops, and you may catch a little bit of cell tower connectivity up there (there are no towers anywhere inside the Park). There are several nice beaches, one with the skeleton of a 53’ sperm whale that apparently died after swallowing a plastic bag – please, REDUCE, REUSE, RECYCLE, we must get better at preserving our oceans and our planet more broadly! If you are lucky you may run into a Hutia (a plump, brown, rabbit-sized member of the rodent family) or two on a beach or on a trail.[9]

The next stop (15 miles from Warderick) is Compass Cay. There is a very protected marina, or you can just anchor outside and dinghy in (they do charge for day boats now: 25 ft or more – $2:00 per ft. plus $10.00 per person landing fee). The main attraction here is to get in the water and pet the local nurse sharks.

While you are in the mood for petting animals, going 12 miles further south will take you to Big Major Cay, or Pig Beach, The Home of the Swimming Pigs of the Bahamas.[10] Visiting the swimming pigs is on many people’s bucket list, and I must admit, I still think it is pretty funny to see them swimming and chasing after people for food. What they don’t tell you “in the brochure”, of course is that they will not hesitate to bite if you don’t hand out the food quickly enough to their taste, that they squeal – loudly, and well, that they poop on the beach and in the water. I like to pet the friendly ones and feed them big carrots. Please don’t feed the pigs stupid things though, like potato chips or beer…. They enjoy table scraps, carrots, other veggies, and they often also appreciate getting some fresh water. Try to avoid dropping their food in the sand though as many get health problems from ingesting too much sand while trying to pick up food fallen into the sand.

We like to anchor right there by Pig Beach and use that as a base to explore the beaches, go snorkeling at Thunderball Grotto,[11] visit Staniel Cay Yacht Club (about 2 miles from Pig Beach),[12] for lunch or dinner, or just some sunset drinks on the deck, and to provision at the Pink Pearl and Burke’s (Blue) Stores. You can usually find most of what you need by visiting both stores.

You can also get fuel and water at Staniel Cay Marina, or stay there, of course. A large selection of nurse sharks also tends to hang out on the steps that go into the water by the Yacht Club’s fish cleaning station.

The final stop on this itinerary south is the Black Point Settlement anchorage, just 11 miles south from Staniel Cay. Black Point is a sleepy little town with holiday cottages, a school (which “cruiser kids” are allowed to attend with the local kids), a “lock up”, several small grocery stores and a few bars and restaurants. We like going to Lorraine’s Café for something to eat and then stopping by to visit Lorraine’s mom at her house behind the restaurant to buy some of the best bread you will taste, including the famous Bahamian coconut bread (delicious also when prepared as French Toast).

[11] The grotto got its name from the 1965 James Bond spy film “Thunderball,” which was shot there. It was also the site of another James Bond film, “Never Say Never Again” in 1983, also based on the Thunderball novel. https://www.bahamas.com/vendor/thunderball-grotto

From Black Point it is 85 miles back to Nassau. If you have time you could of course revisit some of your favorite spots, or explore some additional ones, like Pipe and Little Pipe Cays, Cambridge Cay, Hawksbill Cay or Guana Cay, and Big Farmer’s Cay and its famous Mile Long Sandbar.

If you would like to explore some more of my favorite spots in the Bahamas, stay tuned for my next blog about Eleuthera and Harbor Island!